GROUPM UPDATES UK FORECAST: ADVERTISING TO SURPASS £20 BILLION FOR THE FIRST TIME IN 2019 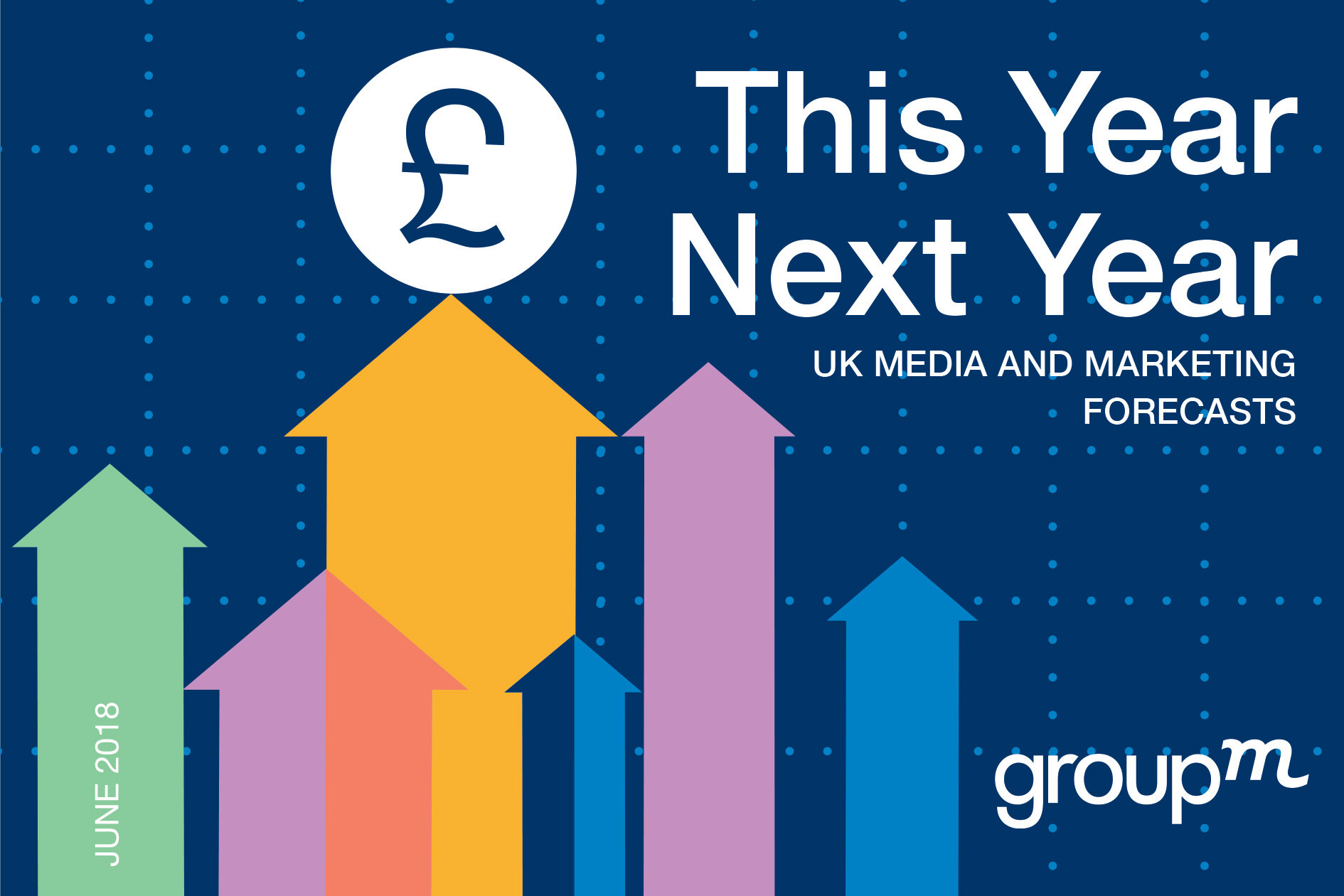 London, 20 June 2018 – UK advertising is expected to increase to £19.9 billion in 2018, up from £18.8 billion in 2017, and GroupM predicts investment will surpass £20 billion for the first time in 2019. This is according to the latest media and marketing forecasts from GroupM, the world’s leading media investment group.

GroupM forecasts 6.1% growth for 2018, down from 6.4% in 2017, and its first growth prediction for the year ahead is 5.1%. Pure-play internet and surging growth by Facebook particularly are the primary drivers for all advertising growth. Pure-play internet has expanded its share of investment every year since 2000. It was 1% of measured advertising then and will reach 59% in 2018, 61% in 2019, per GroupM.

The UK remains the fastest-growing mature advertising market in the world, with growth matching the Asia-Pacific average rate. While sterling is worth 7% less today against the US dollar than it was at the time of the vote to leave the EU, the UK remains the world’s fourth-largest advertising economy in dollar terms. The combination of fast-paced growth and scale sustains the UK as the third-largest contributor to GroupM’s forecasted global ad growth in 2018, behind China and the USA.

Investment in print media continues to shrink, but the trajectory is improving as print publishers become a substantial digital media in their own right. Barring unforeseen GDPR-related catastrophe, digital could comprise of around 31% of national newspapers’ ad revenue in 2018; similar for consumer magazine brands; and around 20% for regional newspapers. The benefits of physical print advertising include brand-safe high-quality environments, late booking ability, flexible pricing, and clear share-of-voice signals to advertisers. The launch of PAMCo (The Publishers Audience Measurement Company) in April revealed a national and regional newspaper universe with unique weekly reach of 46 million, and for magazines, 36 million. This world-leading initiative holds out the promise of a more efficient and versatile print market.

Television advertising investment fell by 2.4% in 2017, but GroupM expects this to recover by 1.7% in 2018 and a further 2.0% in 2019, supported by better reach and monetisation of non-traditional screens. The four-screen BARB (Broadcasters Audience Research Board) programme rating is expected to launch in September, followed by ad impressions in 2019. This collective improvement in TV measurement may help TV compete more effectively with digital insurgents, but GroupM observes that even four screens do not give the whole picture. Viewing on Smart TVs and via big-screen apps is yet to be incorporated, but increasingly important as on-demand viewing migrates from the PC to the big screen.

GroupM reports that Out-of-home advertising investment is stable, but its digital ‘software’ (automation, validation, optimisation) needs to catch-up with its impressive ‘hardware’ (digital screens) to fulfil its potential. Radio spot advertising remains strong with 5% growth expected for 2018 and again for 2019. The UK’s digital audio universe is 22 million, having almost doubled in five years with 41% weekly reach. Audio streaming overtook video in 2015 and GroupM believes it has plenty of room for further advertising growth. Advertising investment in digital and streaming audio is not measured, but already represents about 10% of radio spot revenue.

“UK advertising investment is growing faster than the economy, defying Brexit chaos and bouts of consumer fatigue. One reason is colossal digitisation in media and in marketing practice, driving up competition, standards and innovation. Another is the scale of the tail,” said Adam Smith, Futures Director, GroupM. “We must, however, beware of diseconomies of excessive specialism and short-termism. We need more technology but fewer technicians. Automation including AI must increase to liberate human brains for advertising strategy.”

“Developments in digital measurement can’t arrive soon enough, especially for TV and OOH, and the introduction of PAMCo already demonstrates the value of standardisation and third-party verification,” said Tom George, CEO, GroupM UK. “Our industry is evolving rapidly, shown through the surge in digital advertising, and we need to keep pace through investment in data in technology to ensure clients continue to effectively engage consumers.”