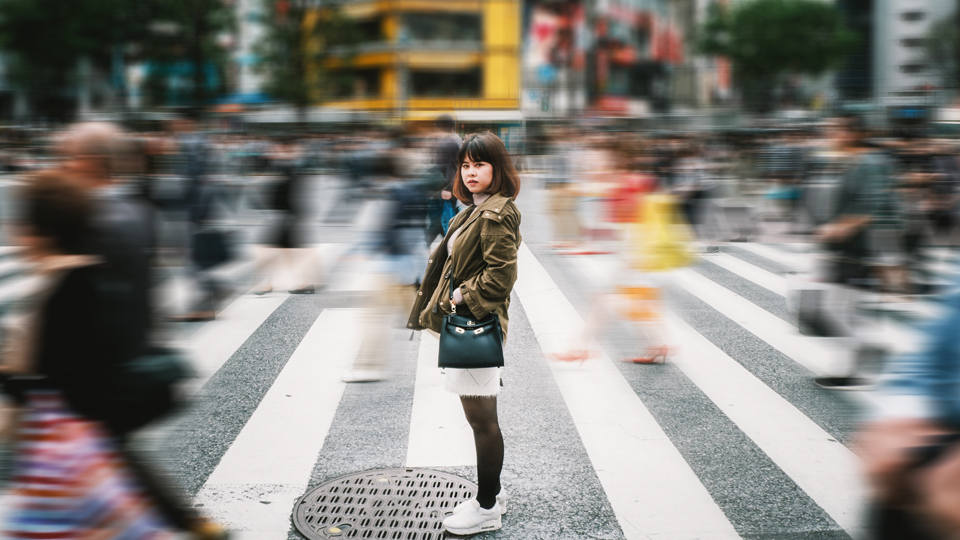 While China remains a critical market for many of the world’s largest marketers, a wide range of issues have risen in recent years that highlight significant divides between China and other countries. With this context, we wanted to investigate how important China is to large brand owners based outside of the country. By assessing this activity, we can better anticipate the choices many of those companies will make in years to come.

Global tax policy is another matter of interest to the world’s largest marketers. As the U.S. participates in multilateral efforts to establish policies that are consistent around the world, we look at the degree to which changes in tax policies may cause these companies to incur higher costs, and whether or not higher taxes might impact advertising budgeting.

One of the issues with the greatest potential to impact large marketers at present relates to matters currently involving China. In recent weeks, many of the world’s largest apparel brands have been impacted by boycotts (or threats of the same) associated with statements those brands have made regarding their supply chains and reports of the use of forced labor of the ethnic Uighur population in the Xinjiang region.   And then this week, a US State Department spokesman – referencing the issues in Xinjiang among other human rights issues – made comments which conveyed that the US government and its allies are contemplating a boycott of next year’s Winter Olympics, which are scheduled to take place in Beijing.  The State department “walked back” these comments afterwards, but it seems unlikely that the matter is closed.

China has served as a primary source of global economic growth for several decades now, first as a producer of many of the world’s goods and more recently as its fastest-growing consumer on a collective basis.  However, in recent years long-simmering geopolitical tensions are pointing in a direction that involves reduced economic integration with every passing year going forward.   Reinforcing the point for global marketers, China has been building many strong domestic brands, and so consumers there are much less dependent on products that originate from abroad.

With all of this in mind, we wanted to explore just how important the country is to the world’s largest brand owners.   Looking at the world’s forty largest marketers not based in China and who are publicly listed – a group of companies generating approximately $4.2 trillion in revenue from around the world during fiscal 2020, we found the following: 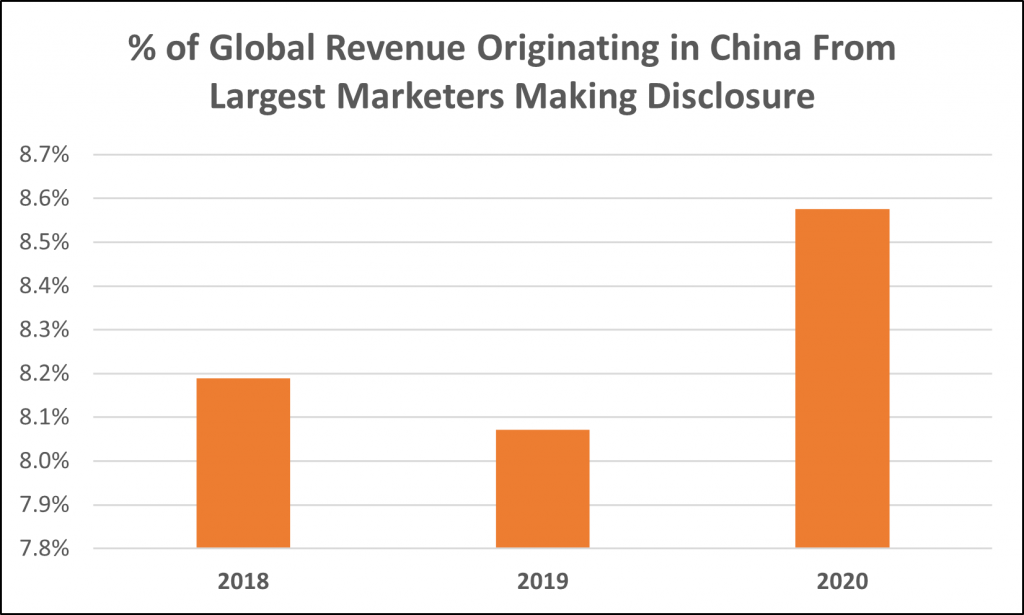 China likely represents around 5% of total recorded revenues for the world’s forty largest marketers, including those who do not make disclosures.  Based upon our analysis of this data, we can roughly estimate that all of these companies together generate a mid-single-digit share of their revenues from China, despite the country accounting for approximately 17% of global GDP (according to this week’s newest data from the IMF).

As a general rule, individual companies continually assess their position in any large, growing market and constantly explore ways to realize the potential of that market.   However, when a global brand owner’s values conflict with those common to any one country and values are intertwined with strategy at a global level, the brand owner will first look to determine if differences can be reconciled.   If those differences cannot be reconciled, the size of the market in question will be compared with the strategic and financial benefits the company will realize over the long term by staying true to its values.   For most companies, corporate values and the related strategic choices are worth much more than a single-digit share of revenues, and market presence decisions will be made following this reality over time.

Global tax reform increasingly likely.  As a separate global topic of interest to global marketers, taxes on multinational corporations featured prominently in the week’s news.   According to a report by The Financial Times, the US government is now aligned with a global consensus regarding the need to address taxation on a multi-lateral basis.  One of the proximate factors driving the issue has been the relatively low levels of taxes paid by software-focused technology companies whose operations are distributed around the world, and who are best able to shift costs and revenues across jurisdictions, although the concerns cross industries.

The 40 Largest Marketers’ Tax Rates Averaged 21% Over Past Three Years.  To assess the degree to which changes might impact marketers, we looked at the same group of forty companies – including those which generated revenue in China and those which did not – and assessed metrics including their pre-tax income, provisions for income taxes (meaning: the accounting-based estimates for taxes associated with a given period’s activity) and cash taxes paid (meaning: the actual amount of tax paid to authorities around the world).   Over the past three years, this group of companies produced taxable income averaging $430 billion, or 10% of revenue each year.   Taxes payable on this amount equated to 21% on both an accrued basis and on a cash paid basis.

Corporate Taxes Could Rise Around the World.  Put differently, from our analysis we can say that the world’s forty largest marketers saw no meaningful difference in the taxes paid vs. what they reported, at least on average.  From a policy-making perspective, the bigger question is whether or not 21% is the right level of tax, including federal and sub-federal levels of taxation.   To the extent that a global minimum of 21% became a global minimum – which the US reportedly supports, according to the Financial Times, and which is well above levels such as Ireland’s 12.5% headline rate of tax, for example – it would suggest taxes would rise to some degree for all companies.

Higher Taxes Won’t Necessarily Impact Ad Budgets.  Would a tax increase impact advertising budgets for large brand owners?   Not likely, at least in a direct way.   Lower levels of profitability for companies won’t likely cause them to reduce budgets to make up the difference.   We have observed that advertising spending tends to be budgeted as a percentage of revenues.  Shifts up or down from a given level is typically a function of the competitive environment in which a marketer exists, with unstable oligopolies positioned to see increases in spending and stable oligopolies more likely to see limited change.

How Tax Proceeds Are Used In Support of Marketer Goals Likely More Critical For Sector.  The bigger impact for marketers from changes in tax policies will ultimately be the degree to which higher taxes are put to use in supporting the wider range of issues that marketers care about as corporate participants in society, such as the degree to which spending on education might lead to more productive workers or improved infrastructure or the degree to which tax proceeds are ultimately used to drive consumer spending.