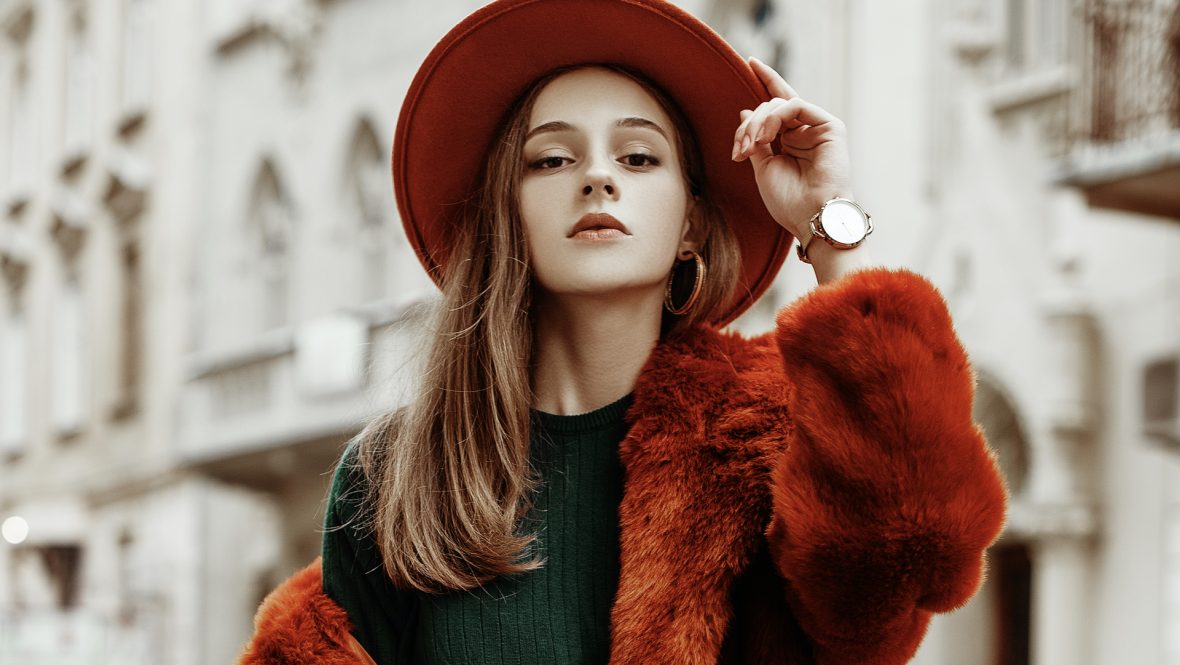 We offer our latest perspective on the state of inflation, the health of the luxury goods industry and the important read-throughs from Disney’s most recent earnings release that much of the investment world and media industry have yet to focus on.

Inflation is high, and likely helping contribute to advertising industry growth for now.  Inflation was once again a key topic of interest for the global economy this past week, with news that US consumer price inflation was up 6.2% on an annual basis in October.  Every month since April has now risen at solidly mid-single digit levels, rates of change which have not been observed for many decades.  Inflation is also unusually high in Europe at the present time: late last month, Eurostat published an expectation of 4.1% inflation in that region.  Meanwhile, in China consumer inflation isn’t quite as robust, with official statistics published on Thursday only indicating a 1.5% gain in October, but cost pressures are much more evident in the producer price index released on the same day showing that index up by 13.5% year-over-year.   To the extent we previously anticipated robust inflation throughout 2021 – and perhaps for longer – it’s not altogether surprising, although it’s nonetheless jarring to residents of economies used to solidly low-single-digit rates of change in prices.

As we’ve written before, the impact of higher levels of inflation on advertising is generally positive, so long price increases coincide with higher levels of spending by consumers and commensurately higher revenues by producers, who tend to budget for advertising by allocating a fixed or semi-fixed percentage of revenue to advertising.  This should be true at least so long as inflation does not cause meaningful friction in markets or otherwise deter consumers from making decisions to buy goods.  As consumers continue to demonstrate a willingness to buy products at higher prices – often substituting more expensive ones for less expensive ones, as we’ve seen with car purchases, for example – meaningful friction is not evident as far as we can see, at least not yet.

The luxury industry is relatively healthy, up year-over-year, but growing somewhat slower vs. pre-pandemic levels. Pandemic-driven behavioral changes are undoubtedly a contributing factor.   One segment of the advertising industry which seems especially unlikely to be impacted by inflation is the luxury category.   With the industry’s largest companies or businesses with related operating segments who report quarterly results – a group including LVMH, Richemont, Kering, Hermes, Estee Lauder, L’Oréal, Capri, Hugo Boss, Burberry and Tapestry – having now published their most recent results, we can estimate that the sector grew by 21% organically during the third quarter of 2021.    While that figure is clearly strong, arguably a better way to look at the long-term health of the business is to look at it on a two-year basis.  Over that period of time, covering the third quarter of 2019 through the third quarter of 2021 the compounded annual growth rate was approximately 6%, similar to what occurred between the second quarters of 2019 and 2021. 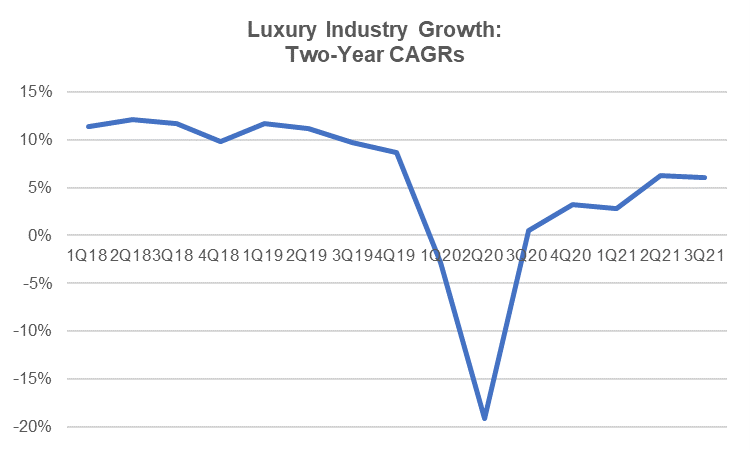 The results are arguably decent considering how much of the industry depends on people travelling and going out, although they do reflect a slower pace vs. the industry-wide low double-digit levels observed in years immediately prior to the pandemic.    Much of the drag is due to Fragrances & Cosmetics from the aforementioned group of companies, where growth on a one-year basis was up 19%, but growth on a two-year basis was only up by 3%.  By contrast, Apparel and Accessories were up 9% over the past two years on average (slower, but not by much vs. the 12% average pace over the two years prior to 2019) while Jewelry appeared to actually sustain an accelerated pace of organic growth, with a second consecutive quarter of 11-12% organic growth on a two-year basis, which compares very favorably to a two-year growth rate of under 7% prior to the pandemic.

Disney’s results disappointed investors this week, but the impact of their investment in content around the world has barely begun.  Within the media industry, the big news of the past week was arguably Disney’s earnings results, which generally disappointed investors.  While the factors which many of them focused on – current-quarter subscriber additions to Disney+ — were arguably the wrong ones for purposes of assessing the value of the company, given the limited read-throughs that subscriber counts can have (especially considering that so many of them are in low-cost markets and were always unlikely to be meaningful profit contributors for a very long time), the comments we thought deserved the most attention were those that management made on its earnings call, which related to an intention to expand its investment in local language content relative to what was previously conveyed.   Last month, the company announced that it would have 18 local language originals produced over the coming year in Japan, South Korea, Indonesia, Greater China and Australia, with 50 set for 2023.  Many more originals have previously been set for production in Latin America and Europe, and other programming is being licensed.

Between Disney, Netflix, Amazon, the soon-to-be-combined Warner Discovery, Comcast and Viacom, US-based media giants are poised to spend substantially more on original non-English language content than most incumbent broadcasters will, and in our view are highly likely to take meaningful viewing shares in many countries around the world within a relatively short period of time, unless those local market incumbents significantly increase their own spending on content and expand aggressively abroad.

For now, few media owners outside of the US have demonstrated the will to invest sufficiently against their businesses in order to make the push to build for the global stage on which the television and video industries are increasingly organized.   While many of them will post solid revenue growth in the near term as they capitalize on the generally healthy if inflationary conditions that are prevalent in many parts of the world, any positive interpretations that don’t account for the need to make significant investments at a global level will probably prove to be misguided in the long run.