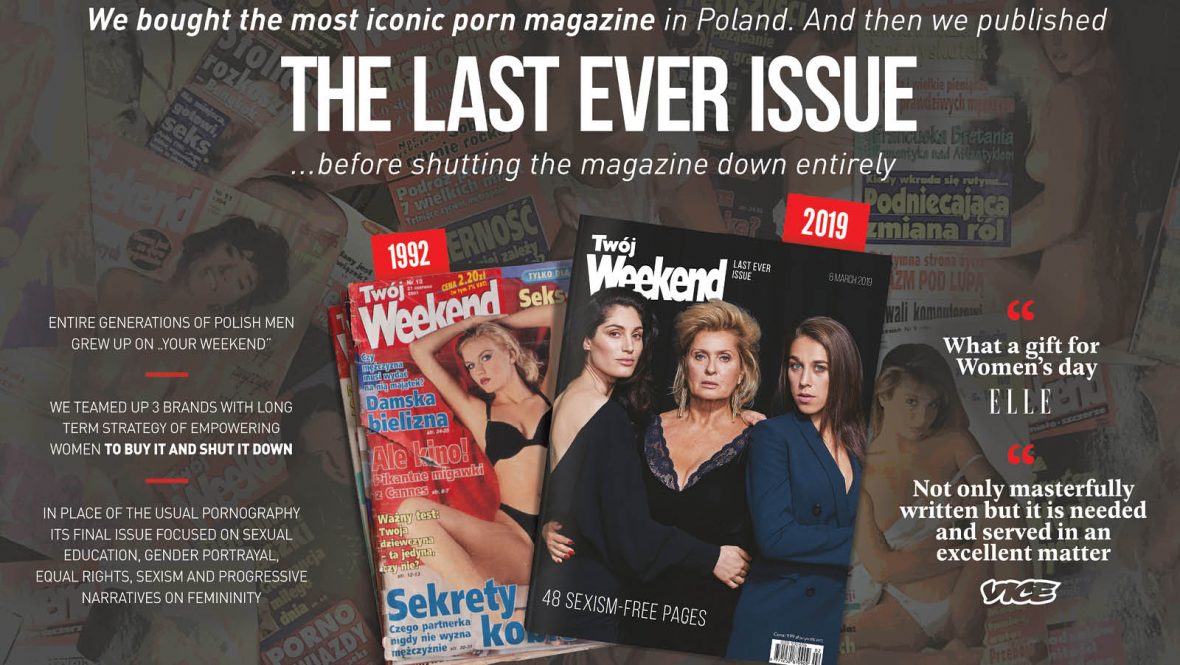 In Poland, women earn 18.5% less than men and everyday sexism in public is still socially acceptable. It is a conservative society which objectifies and marginalizes women. Even for the westernized liberal Polish middle class, gender inequality is an abstract problem.

Gazeta.pl is a liberal news portal which wanted to change this. It is a brand which builds credibility by social engagement – a portal which starts mass discussions about significant social topics. Wavemaker, Mastercard, VMLY&R, and BNP Paribas were ideal partners as they have a long-term commitment to empowering women.

For 27 years, Your Weekend, one of Poland’s longest running and most read adult magazine, reduced women to sex objects. In December 2018, when the magazine was for sale, Wavemaker purchased it immediately and used it to challenge the culture of sexism and gender inequality. Wavemaker transformed Your Weekend into a ground-breaking magazine promoting diverse and progressive narratives of femininity.

Wavemaker teamed up with Mastercard, VMLY&R, and BNP Paribas and decided to create one very different, final issue of the magazine. Published on International Women’s Day, it retained the regular sections and columns but re-imagined the content around sexual education, gender portrayal, equal rights, sexism and more. It was the symbolic end of an era and a spectacular beginning for a much-needed national conversation about equality.

Their most impressive result is…0. That’s the exact amount of impressions of Your Weekend’s objectifying content since 08/04/2019.

“The Last Ever Issue” content generated 500k+ visits to gazeta.pl.

The campaign was mentioned by Poland’s most influential TV shows such as “Pytanie na Śniadanie” and “Szkło Kontaktowe”. It was even featured as the main story on gazeta.pl’s biggest competitor’s news site – onet.pl.

The online edition of the magazine was the best selling e-magazine in Poland of March 2019.

Projected offline sales make it the best selling issue of Your Weekend in 10 years.

But most importantly, Wavemaker transformed a long-standing vehicle for objectifying women into a platform for education gender equality.

We believe there always is a better way to grow. We positively provoke growth for our clients by reshaping consumer decision-making and experiences through media, content and technology. The Wavemaker way is globally consistent. Fuelled by the world’s most powerful consumer data, we understand where and how marketing can intervene decisively to help brands win more sales. Our 7,600 people across 90 markets have the deep knowledge, confidence and courage to provoke growth for some of the world’s leading brands and businesses.