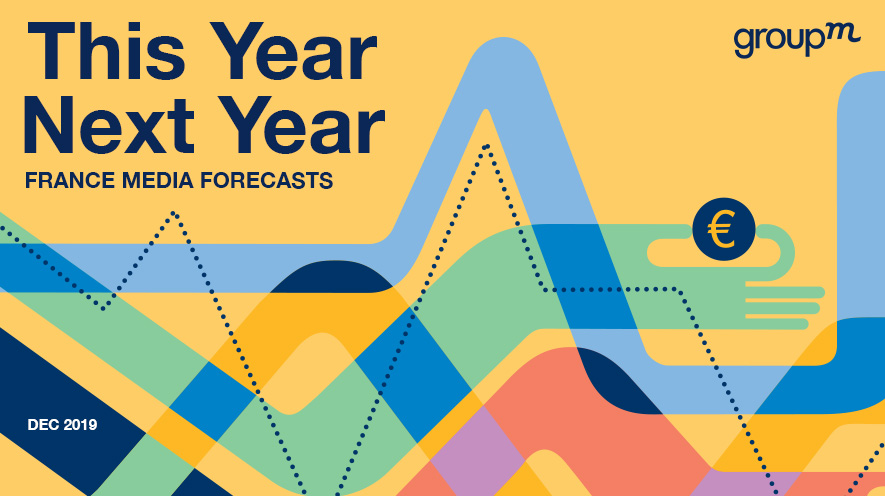 While this level of growth places France in the upper range of European markets advertising growth, it is only in line with the global average. France is the sixth largest advertising market (and the seventh largest contributor to growth), but far behind Germany and the U.K., respectively 40% and two times bigger than France. However, this growth remains encouraging in view of the social situation that has characterized the country for the past 12 months with the yellow vest crisis. The impact on consumption was not neutral, but advertisers did not significantly withdraw from their advertising investments. Looking back over the last 10 years, this is the third strongest performance after 2018 and 2010 (although growth that year followed the -7.4% decline in 2009, -11.2% overall).

While the international economic context remains very uncertain, France is showing some resilience in the face of this gloom. The domestic economy is traditionally less affected by the effects of globalization given the structure of its economy and, in particular, the weight the state represents in it. On the other hand, during strong economic recoveries, the impact is less pronounced in France. The pace recorded for the coming years, with a slowdown in advertising growth expected until 2023 before a slight recovery in 2024, linked to the Paris Olympic Games is lower than the global trends anticipated over the next five years. While the French advertising economy should grow by +15% between now and then, France will still be overtaken by India and Brazil and should likely be the world's eighth largest advertising market at that time.

The growth drivers of digital-first marketers are supporting advertising growth.

The long-standing contributors to media investments, such as the FMCG, Distribution and Automotive sectors, have for several years shown more or less long-term stability in their volumes and therefore slight variations. Moreover, these so-called traditional players tend to reallocate their volumes to digital media and thus penalize offline media investments. On the other hand, digital brand owners tend to increase their investments particularly in traditional media to benefit from their reach and brand equity building capabilities. We are seeing significant media battles involving millions of euros between competitors in certain sectors - food delivery for example - that are likely to be followed very soon by the marketing struggle on SVOD platforms over the next 12 months. Netflix and Amazon (due to the multifaceted nature of its business) especially are already very present while waiting for HBO, Apple TV and Disney+.

This is therefore a windfall effect for the media, since these players are in the development phase on the market. However, we remain concerned about the sustainability of these investments over the medium term. In addition, these players are disrupting industries and undermining existing large investors. These short-term effects should therefore not be seen as ensuring longer-term growth for the advertising industry.

Advertising growth is driven by digital.

This year, and over the next few years, digital investments are growing at a double-digit rate. For 2019, they represent a 45% share of investments, i.e. three points of increase and should hold 55% of the advertising market by 2024. These figures include both pure-play media owners and the digital revenues associated with a traditional media player. Nevertheless, all available data shows that almost all digital growth (94%) benefits Facebook and Google. As a result, and despite multiple brand safety controversies from pure-play digital media owners, the path toward profitably transforming historical media brands into digital media seems long and complex. However, we have started to see the first slowdown in growth at YouTube and Facebook in recent months, which should continue in 2020. As marketers improve their data management capabilities, develop more programmatic expertise, and as the industry invests in new ad quality initiatives (such as Digital Ad Trust, launched in 2017 by many of the industry's trade associations and now providing brand safety assurance for 141 of France's most important websites) we expect a more balanced distribution of digital growth in the coming years.

We expect linear TV to slow down at the end of 2019 and over the next three years.

The current year should end with stable volumes. This is particularly disappointing to media owners given the first quarter was up +2%. Since then, we have seen a contraction in volumes, even if we must not neglect a base effect related to the 2018 FIFA World Cup. Nevertheless, the combination of declining media consumption (up to minus 20 minutes viewing time year-over-year for some audiences) and stable demand in a constrained regulatory environment is generating inflation that is increasing price pressure between marketers and TV networks without impacting positively. During certain periods of the year media owners are at the maximum of their quotas for commercial loads. We are therefore more or less reaching the maximum revenue potential for television under the current legal framework. This becomes a structural problem that can only be solved by relaxing the rules. The future Audiovisual Law could provide some oxygen, in particular through addressable TV, whose revenue potential could amount to hundreds of millions of euros within a few years in our view. However, in its current form, this new regulation is very conservative and may not enable the changes necessary for the industry to realize its financial potential.

It is the fastest growing media after digital. This performance is the result of a transformation of inventory toward more digitized panels (and therefore of a strengthened supply capacity), as well as the good health of transit advertising. In its traditional version, OOH (outside of transportation), is decreasing. The increasing power of digitization has enabled media owners to bring new solutions to advertisers, especially those combining with ad mobile strategies. This trend is expected to continue in the coming years.

Radio persists despite a contraction of Its audience.

In its traditional mode, radio shows an astonishing vitality in view of the decline in listeners according to audience surveys. Radio continues to hold up well because the medium offers agility in setting up campaigns, because it is simple to create advertisements, and because it is a very efficient medium, especially in driving foot traffic. Radio also benefits because it has embraced digital audio, which has shown strong growth over the past 18 months. Digital audio broadens the universe of competition to pure players (Spotify for example), offers the possibility of extending programmatic buying to radio and helps marketers activate influencers via podcasts. These are all real new growth drivers.

Cinema remains dependent upon luxury and automotive advertisers. However, its growth has been generated by newcomers, including lnstagram and Snapchat. We are nevertheless very attentive to the future of this medium, especially as audiences may erode because of the increasing availability of SVOD platforms in 2020. It is difficult to project the impact on advertising revenues. but we remain very cautious in our projections over time and incorporate stable expectations for the medium.

Print continues to show a decline in these revenues, regardless of the type of print.

For the thirteenth consecutive year, print reported a decrease in investments. Its share has fallen in half over the last seven years, with 13% of SOI (share of investment) now. The year 2019 should end with -5.9% for the news and -8% for the magazine. Forecasts for the coming years remain negative, although we expect the decline to slow. Digital media revenues are not growing fast enough for publishers to return to growth, although their initiatives in data management, creation of video and audio inventory growth of consumption via mobile devices should help lo limit decline.

Our analysis shows that editorial media (traditional publishers, radio stations and TV networks) need to transform as fast as possible to retain their importance to marketers.

The next few years will be pivotal for these media owners. TV will continue to see its audiences decrease while at the same time its competitive universe grows because of SVOD platforms. Radio will have to create its own little revolution to make the most of the audio's potential for profit. This also applies to the press, whose durability will depend upon their ability to find new revenue sources. More generally, traditional media owners need to improve how they measure and monetize non-linear audiences, as consumers rely more and more on digital devices. Without significant changes from traditional media owners, digital-first pure-play media owners will continue to take share of industry spending, even if we anticipate a slowdown in their growth rates.