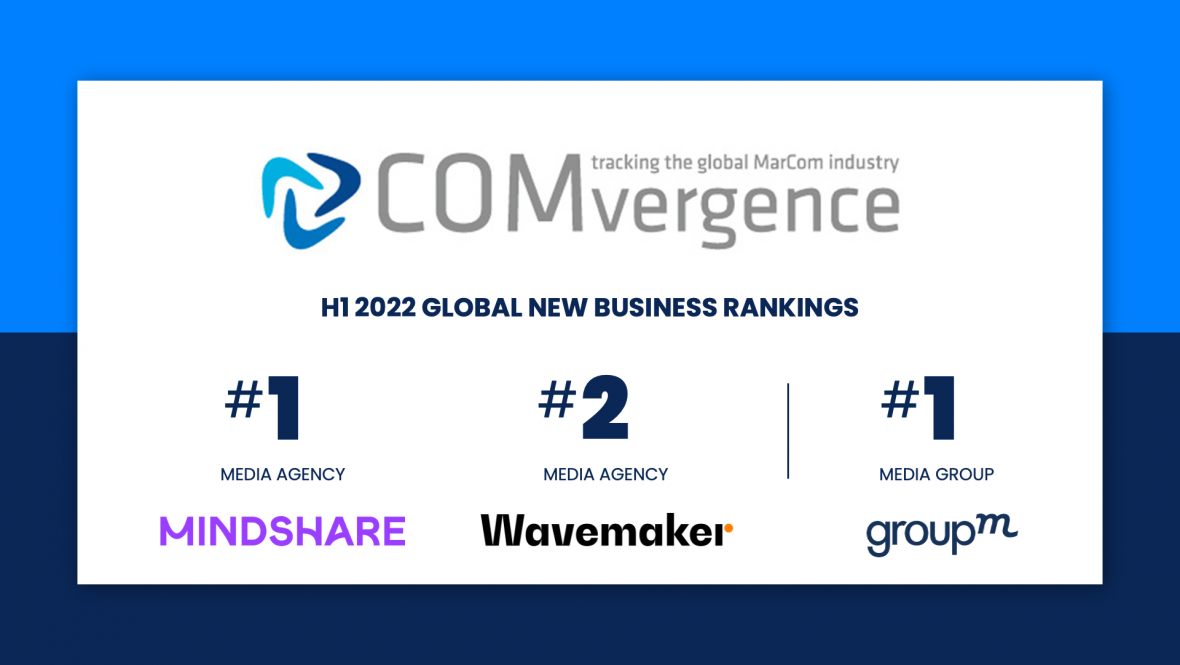 GroupM leads the industry in new business and retention for the first half of 2022, according to COMvergence’s latest New Business Barometer (NBB), reflecting the strong appeal of the company’s differentiated offering and vision to marketing decision-makers around the world.

COMvergence—an independent and international research bureau measuring the performance of major global ad and media agencies—ranked GroupM first in total new business among agency groups, with a calculated value of $2.4 billion in the first half of 2022, and first in the critical area of business retention, successfully defending 54% of new business pitches where GroupM was the incumbent through the same period.

“It’s no secret that 2022 has been a challenging year for many marketers,” said Christian Juhl, GroupM’s Global CEO. “Between inflation, economic uncertainty and ongoing behavioral and social upheaval, the pressure on brands to navigate complexity and outperform the competition at scale has never been higher. It is especially gratifying to be the first-choice solution in the marketplace in this context. We are grateful to all our clients who put their trust in us to help them grow their businesses, and we are excited to continue raising the bar together.”

Mindshare (assessed by COMvergence at $1.2 billion) and Wavemaker (assessed at $903 million) ranked first and second, respectively, in total new business value, which COMvergence calculates as the breakdown of new client wins, losses and retentions. Other findings included in the COMvergence NBB report include:

“Winning a pitch is one of the most rewarding aspects of our business,” said Elizabeth McCune, GroupM’s Chief Growth Officer. “It shines a spotlight on our ability to think both analytically and creatively, to bring forward some of our boldest initiatives and to develop ideas at times we’ve only dreamed of. I am so proud of the effort we’ve made as a group so far this year, on the heels of 2021, which was one of the busiest pitching years we’ve seen. This recognition belongs to all of those who make these wins possible.”

COMvergence’s assessment of GroupM’s performance underscores the positive impact of the company’s business transformation initiatives and commitment to raising the bar for performance standards and responsibility in the industry. Examples in 2022 include the launch of GroupM Nexus as the world’s largest community of performance marketing experts, the introduction of GroupM’s Premium Marketplace offering, the announcement of EssenceMediacom as a new model for the future of agency services, and the ongoing enablement of its Responsible Investment Framework through technology and industry partnerships.

By region, GroupM ranked first in the COMvergence NBB in APAC ($1.21 billion) and in North America ($904 million) and third in EMEA, according to COMvergence.

GroupM is the world’s leading media investment company responsible for more than $60B in annual media investment through agencies Mindshare, MediaCom, Wavemaker, Essence, and m/SIX, as well as the outcomes-driven programmatic audience company, Xaxis. GroupM’s portfolio includes Data & Technology (Choreograph), Investment, and Services, all united in the vision to shape the next era of media where advertising works better for people. By leveraging all the benefits of scale, the company innovates, differentiates, and generates sustained value for our clients wherever they do business. Discover more about GroupM at www.groupm.com.