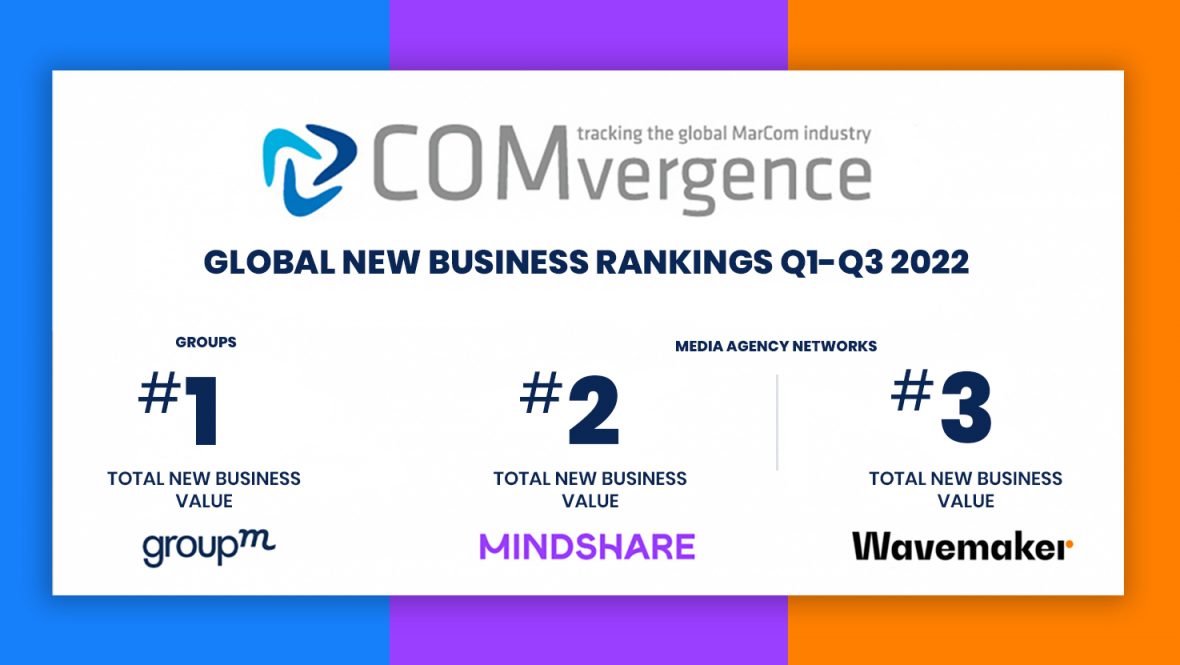 Mindshare and Wavemaker among Top 3 agencies by new business value

GroupM secured 24% of total reviewed media spend through the first three quarters of 2022, according to the latest COMvergence New Business Barometer (NBB), further demonstrating the company’s market-leading offerings and innovative vision that marketers around the world find valuable.

At the group level, GroupM ranked first in total new business value of $3.1 billion, which includes a market-leading $1.99 billion in retentions.

Mindshare and Wavemaker ranked second and third, respectively among agency networks with $1.29B and $1.15B in the NBB from COMvergence, an independent and international research bureau measuring the performance of major global ad and media agencies.

GroupM agency networks were also among the top 10 in terms of new business value across EMEA and LATAM. Notably, Wavemaker ranked sixth among agency networks in LATAM ($18 million), and MediaCom placed seventh in EMEA ($117 million).

The COMvergence rankings come at a time of rapid change in the media and advertising industry. GroupM’s reported success is evidence that the company’s stated values and commitment to make advertising work better for people, in both times of uncertainty and opportunity, resonates with marketers. The establishment of a media decarbonization coalition, the coming emergence of EssenceMediacom and the continued empowerment of its Responsible Investment Framework are enabling GroupM to lead the way.

GroupM is the world’s leading media investment company with a mission to create a new era of media where advertising works better for people. Responsible for more than $60 billion in annual media investment, according to COMvergence, the company innovates, differentiates, and generates sustained value for clients wherever they do business. GroupM’s portfolio includes agencies Mindshare, Wavemaker, EssenceMediacom and mSix&Partners, as well as Choreograph (Data & Technology), GroupM Nexus (Cross-Channel Performance & Activation), and GroupM Investment. Discover more at www.groupm.com.